Copper in the Arts

The Copper Development Association Inc. is the market development, engineering and information services arm of the copper industry, chartered to enhance and expand markets for copper and its alloys in North America. Each month the CDA publishes an online magazine, Copper in the Arts, featuring innovative and artistic uses of copper. I am honored to be featured in the August 2010 issue.

The Festival of the Little Hills in St. Charles was awful this year. Downpours on Friday left the grounds of Riverfront Park a total swampland. Neither the City of St. Charles nor the Festival staff cared that people could not walk into artists' booths without sinking in the mud. I've been at other shows where storms created problems, and the staff at those shows busted their butts to help the artists. In Des Moines when our tent was blown down, unknown volunteers appeared to help us salvage what we could. In Mt. Vernon, IL, a muddy site was transformed by scores of volunteers scattering straw so people could walk. But in St. Charles, we were handed one bag of OilDri, which covered approximately one square foot of muck. No assistance at all was given to those artists whose tents were destroyed by wind. And then the staff just disappeared. So after 2 days of watching people go by carefully stepping around the water pools on the concrete sidewalk while studiously avoiding the muck in the booths, we gave it up, tore down our booth, and left. The complete lack of concern for the artists left a bad taste in my mouth and I would not recommend this show to anyone.

Terrie's had a lot on her mind this month. In addition to being the responsible party for her aging and ailing grandfather in the nursing home, school, and dealing with our business, she was convinced she was just minutes away from a heart attack. So.....she had a cardiac cath and should now be able to rest easy because she does not have any problems. However, recovery from the procedure is limiting her activities somewhat and is driving her nuts. This, too, shall pass.

We haven't seen an oriole in a few days, so they must have headed south. Also, our gaggle of hummers is thinning somewhat. Sure do hate to see them go, but understand why they must.

Next up is the Harvest Festival at Silver Dollar City in Branson. Yay! We love the time we spend there and meeting all the people who come by. After the summer show season we've had, we're both ready to "move in" to our booth in the City. Come see us! September 11-October 30, park is closed Mondays and Tuesdays.

Hummingbird fact for today: Male hummingbirds orient their feathers toward rivals to best display their brilliant iridescent colors.
Posted by Ozarklake at 7:04 AM No comments:

The King of His Realm 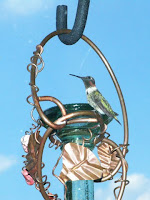 A customer and fellow hummer fanatic managed to capture the personality/attitude of the male Ruby-throated hummingbird regarding HIS feeder. This photo is published here with permission of the photographer, Cam Schutte, Kansas City, MO. Thanks, Cam, for sharing!

Cam and his wife Shirley are prime examples of how easy it is to fall victim to the charm of the Ruby-throated hummingbird. We met them at an art show a few years ago. They knew there were hummers in their area, but they had never had a feeder. They purchased one, followed our tips, and soon were enchanted by the amazing creatures. They added another feeder a year or so later so that Cam could enjoy watching them from his home office. They stop by to visit every time we do an art show in their area - not to purchase another feeder but to share their new-found infatuation with the little charmers. They are now almost as smitten as we are. And thankfully, Cam is a much better photographer than I am!

We are shipping orders to two new wholesale locations, and shipping more items to an established customer. Thanks to The Flying Pig in Algoma, WI, for the re-order. New retail locations are Bear Creek Cafe & Gift Shop in Bear Creek, PA. And Wolfe Gallery in Deland, FL.

The last outdoor show this season for us is this coming weekend. The Festival of the Little Hills in St. Charles, MO, draws an attendance of over 100,000. The hours are long and the weather is supposed to be hot and humid. We're just keeping our fingers crossed that there is no rain!

After we get home from St. Charles, we'll put away all of our "modern" display and start gathering everything we use in our booth in the 1890's setting of Silver Dollar City, the home of American craftsmanship, in Branson. The National Harvest Festival runs Sept. 11-Oct. 30. If you've ever wanted to visit Silver Dollar City, this is the time to do it! Literally hundreds of artisans are on site with their amazing handcrafted items, including over 50 Best of Missouri Hands Juried Artists.

Hummingbird fact for today: The 17 species of hummingbirds that have bred in the United States and Canada represent approximately 5 percent of the world's hummingbird species.
Posted by Ozarklake at 5:25 PM No comments:

We are totally amazed at the feeding activity we are blessed to witness each and every day while these guys are here. The season is MUCH too short!

Posted by Ozarklake at 9:13 AM No comments: