Nest Building and Courtship are in Full Swing

Our little wire suet box that we have stuffed with raw cotton and cat hair is being attacked daily. There's definite signs that "something" is pulling out bits of both cotton and hair to add to the teeny tiny nests that are being built in the area. This material, along with plant parts and spider web to hold it all together, go into the nest, which is usually located in the fork of a downward sloping branch. The tiny nest is about the size of half a walnut. She will cover the outside with bits of gray-green lichen to camouflage it, and line the inside with soft plant down,

We're seeing some mating displays as well. The mating process is quite complex involving several activities in which the female plays an active role. Males attempt to attract females' attention with spectacular courtship flights in which a male flies upward 15m or more and then dives down at top speed, pulling up at the last moment to complete a U-shaped pattern; the pattern is usually repeated several times before the male takes a break. The sound of the male's wings are particularly loud in courtship flight, which may be accompanied by vocal chittering. Eventually, the female selects a male--perhaps one with a particularly energetic display or the one defending a feeding territory that appears especially rich--and mates with him.

After the male mates with the first female, he may mate again with several others. This promiscuous "harem system" works well for the species because there are fewer adult males than females in a typical local population. After mating takes place, the female assumes all parental duties. The male does not help at all in looking after the eggs or their offspring.

Since every bird is on an individual schedule, and a lot of energy is currently being expended, there is heavy feeding activity - especially during a cool rain. The video above was taken yesterday, just about dusk and during a light drizzle/mist. Once Mom lays her two white tiny pea-size eggs, she will visit the feeders less often, as she sits on the nest for 50-55 minutes of each hour. After the eggs hatch, generally 14-16 days, she will feed the chicks a regurgitated slurry of protein (from tiny insects she eats) along with nectar and pollen. Newly hatched hummingbirds are naked and blind. By the third day after hatch, the chicks have doubled their mass, which doubles again by day five and again by day eight--about the time when the young start producing their first noticeable pinfeathers. Chicks are in the nest for almost three weeks--making the total elapsed time from egg-laying to fledging about 5-6 weeks. When the nestlings finally leave the nest, they are completely grown and innately able to begin foraging on their own.

Several pairs of orioles, both Baltimore and orchard, are hitting the jelly feeders daily. They are extremely camera-shy, however, and take off when we try to get pix.

We're working on sending out wholesale orders. This week the Owl House in Saugatuck, MI, received their order, and next week Stewart's Village Gallery in Waxhaw, NC, will have their order. We're also be giving a presentation about hummingbirds at the Lake Bloomers Garden Club next week. Our next show will be at the Green Bay Botanical Garden in Wisconsin the first weekend in June.

Hummingbird fact for today: Occasionally, because of cold, wet weather that kills the eggs or nestlings, or when windy storms blow down a nest, the female Ruby-throated Hummingbird will start the nesting process over again. If she returned from the wintering grounds early enough and linked up quickly with a male, she probably has no problem pulling off a re-nesting attempt, but if she got a late start on her first nest she may not have time to try again--especially in the northern United States and southern Canada where the nesting season is especially short.

Hummer Population is Growing Around Here

We were gone 6 days for the Dogwood Festival in Huntington, WV. Before we left, we had counted 4 males and 3 females at the feeders.Our good neighbor kept the feeders maintained while we were gone. Now that we are home, we are beyond the "counting" phase because there is just no way to keep track of all the visitors now. Yeehaw! Summer will be fun again this year! 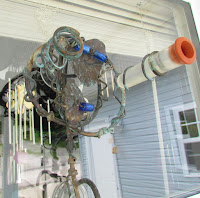 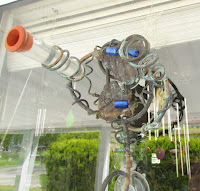 Many customers ask us how the copper on our feeders weathers. The patina that copper develops is a protective coating - copper doesn't rust away like steel. The green development depends upon both the alloy in the copper and the air quality. Now that we have cleaner air, the green takes longer to develop. This feeder, which has been in use for about 5 years, is developing some really nice green.

While we were in West Virginia, we went to Blenko Glass in Milton. Exquisite color, skilled craftsmen, and imaginative designs have made Blenko famous in the time-honored craft of hand-blown glass. Unfortunately, they are also one of just a handful of such craftsmen left in WV. Because the glass is handblown, mistakes are sometimes made. What is a "mistake" for Blenko, however, can become a beautiful Ozarklake feeder. And in the near future, we will have some of these gorgeous feeders available for sale!

On another note, once again we are contemplating the pets that have been affected by this rash of storms that traveled through places we are familiar with. The human suffering in places like Canton, TX (tornado), and West Plains, MO (flooding), is unfathomable to most of us and many organizations are helping the human victims. But humans at least understand what has happened. Pets cannot comprehend why they are separated from their families, why they can't find their home, why their world is now topsy-turvy. We have learned that the West Plains Regional Shelter, a no-kill shelter which was already struggling financially, has suffered structural damage from the flooding to add to their problems as they take in pets misplaced by the flood waters. If you are so moved, the address is 1438 Hwy BB, West Plains, MO 65775. It appears, from what we can find online, that Nicholas Pet Haven has taken a prominent role in rescuing and harboring pets misplaced by the Texas tornadoes. Their address is 12903 State Highway 155 S, Tyler, Texas 75703.

To end this on a happier note, here are some pix of the hummers on the front porch today. Note the two females sharing at the one feeder. 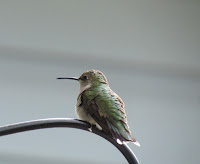 Hummingbird fact for today: Hummingbirds have 1,000-1,500 feathers, the fewest number of feathers of any bird species in the world.
Posted by Ozarklake at 4:17 PM No comments: