For 363 days of the year, the little town of Hartsburg has a population of just 108. It's at the end of a road between Jefferson City and Columbia. The land surrounding Hartsburg is rich Missouri River bottom soil. The Hackman farm has been growing pumpkins there for years - huge, gorgeous pumpkins. The Pumpkin Festival began 17 years ago as a way to celebrate this abundant crop. This year nearly 200 vendors of arts, crafts, and festival food lined the streets. 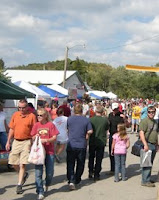 There were a straw maze, arts and crafts, facepainting, and pony rides for the kids. Shooting demonstrations, trades and artisan demonstrations, and several music stages entertained the adults.

The mayor told me attendance on Saturday was estimated at over 30,000, with more coming in on Sunday. We heard from several attendees that it took as long as 90 minutes to travel from Highway 63 down to Hartsburg, moving at a snail's pace. Think about that. A little town of 108 with 30,000 people visiting! Of course, the weather was absolutely perfect which helped to encourage a day outing. But I am totally in awe of the town leaders, the townspeople, and the festival organizers who see to it that this event is such a draw for visitors. My picture doesn't do justice to the crowd that roamed throughout both days.

Hummingbird fact for today: The arrival and departure of hummers depends on the area and species. In the Midwest we recommend having feeders out Tax Day (April 15) to Halloween (October 31) as a rule of thumb. Some hummers have been seen later and the feeders should come in earlier, at least temporarily, if there is an early freeze. Leaving the feeder up will not inhibit the bird’s normal migration. They will go south when they sense it is time. The migration is related to hormonal changes and the decrease in daylight. A few occasional late stragglers may be seen as they migrate from northern areas.
Posted by Ozarklake at 5:28 AM No comments:

Missouri is Quite a State!

This past weekend we exhibited at the Best of Missouri Market at the Botanical Gardens in St. Louis. Four circus tents set up on the parking lot were packed with great agricultural and art items from right here in my home state. Other regions in the country get credit for things like wine, rice, cheese, pecans, and apples. Missouri has all that and more! Each Christmas we send each of my siblings (in Oregon and Tennessee) a sampler pack of Made in Missouri items and we encourage each of you to shop locally for local products.

Mike Miller, who hosts the Saturday morning Garden Hotline Show on KMOX radio in St. Louis, came by our booth. He then asked if I would consent to an on-air interview to talk about my art. I was delighted to say the least. Apparently a lot of people listen to the program because we had MANY people stop by the booth and mention hearing the interview. Thanks Mike! If anyone is so inclined, visit http://www.kmox.com/pages/1175149.php and listen to the Garden Hotline Show, 9-10 am, from 10/4/08.

Again we answered questions and helped out people who have purchased feeders with black rubber stoppers. We also heard a lot of people mention that they had copper feeding tubes. According to everything I have read, this is a bad idea. It is nearly impossible to thoroughly clean the inside of a copper feeding tube and mold will develop in the crevices, resulting in sick little hummers.

Hummingbird fact for today: It does not hurt to add feeders to the area near the garden flowers, box, or planter to supplement the nectar and to ensure it is available regardless of the status of the blooms. Tube feeders are good in this location as they fit right into the blooms. Other feeders should be about 4 feet up or so and should be protected from pets if possible.
Posted by Ozarklake at 2:07 PM No comments: