Back in Full Force

We left for a couple of days to exhibit at the Spring Bloom Festival in Bloomington, IL. We came home to find LOTS of hummers and LOTS of orioles! It's really amazing how quickly they moved back into the area. So of course Terrie had to start hand-feeding them. 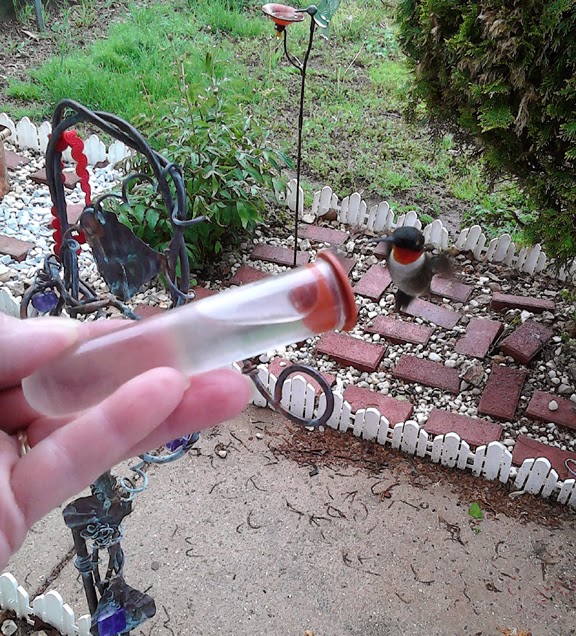 So the neighbor has been recruited to take care of the feeders when we go to Orchard in Bloom in Indianapolis next weekend and the Biggest Week in American Birding the following weekend. Then we'll stay home for a while and just enjoy our birds. 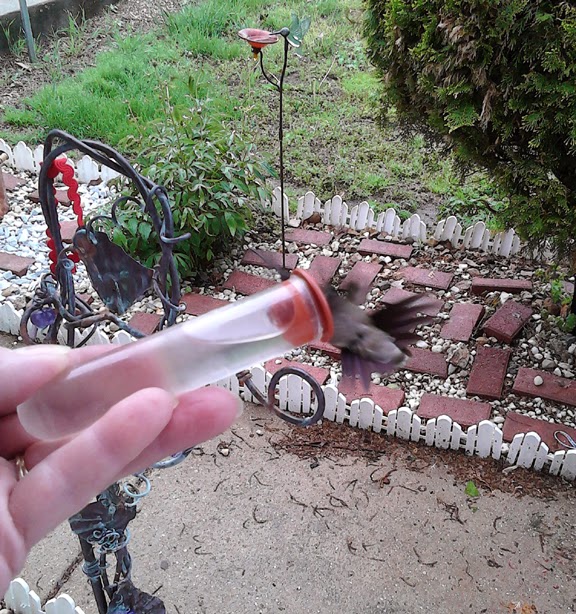 Hummingbird fact for today: Migrating birds of all kinds have adapted to the weather and wait for favorable winds. The ruby-throated hummingbird takes advantage of tail winds constantly.
Posted by Ozarklake at 8:32 PM No comments:

The Project is Complete

As mentioned previously, Terrie has wanted this project completed for a number of years. So she got hummingbird spitters and a pump and a copper tub, and then I built the innards and voila! We have a fountain. The hummingbird "spitters" are from Sprinklites. They came with all the tubing and fittings we needed. The birds have an LED light that comes on at night and changes colors. It's hard to see in the picture because the flash went off, but without the flash, all you can see is the birds and no fountain. The birds "spit" into the top leaf, and then the water falls from leaf to leaf until it goes back into the tub. We still need to get the rocks around it fixed up, but at least it is now in place and working. And the neighbors are all agog!

Hummingbird fact for today: Hummers like moving water. And they like to bathe, but the standard birdbath is too deep for them. There are pictures out there of hummers bathing in fountains so we hope our little birds discover this and use it as their own oasis.
Posted by Ozarklake at 9:17 PM No comments:

All is Right in the World

The flock is returning! This is the earliest we've had a Baltimore oriole at the feeder. We don't even have any oranges - just grape jelly! And we saw TWO hummers at the same time. It should fill up quickly now! Took these pix this morning.

You can almost set your clock by the annual return of the hummers around here - April 15. And this year is no exception. Real light activity at the feeders right now, but it WILL increase!

Our three Gulf shows were a disappointment. We were ankle deep in mud at the Oak Alley Plantation Spring Crafts Show. It was so bad, in fact, that the Plantation has cancelled all future shows. They want to keep their grounds looking nice (and who can blame them?) so after 23 years, they have called it quits on the outdoor shows. Art in the Pass in Pass Christian, MS, was a little better. It was just sort of rainy on Saturday, but the forecast for Sunday was for severe storms, so Sunday was cancelled. Of course, the storms didn't develop. Finished out at Festival de les Fleurs in Lafayette, LA. This show was indoors, so it was MUCH better. However, crowds were extremely sparse on Sunday. On the upside, Stokes Garden Center in Lafayette now carries Ozarklake feeders.

Still, we had a good time. We have now seen most all of southern Louisiana, driven out into the ocean to visit Grand Isle, learned about the persecution and exile of the Acadians as well as the cypress and Spanish moss industries, and discovered that Cajun food is VERY good. We've seen Pierre Part and Pecan Island, and have a better understanding of the lives of the Swamp People.We even visited Duck Commander in West Monroe.

We are completing some wholesale orders and getting ready for upcoming shows in Bloomington, IL; Indianapolis, IN; and The Biggest Week in American Birding in Ohio.

And best of all, the hummers have returned to the Lake of the Ozarks!

Hummingbird fact for today: A hummingbird's brain is 4.2% of its body weight, the largest proportion in the bird kingdom.
Posted by Ozarklake at 7:30 AM No comments: