Just did Artscape at the Dallas Arboretum. What a beautiful place! The weather was fantastic and the air was filled with so many fragrances from all the blooming plants. The flowering cherries were in full bloom behind the artists' tents. The crowd was very appreciative of the creativity and effort that artists put into their work. All in all, one great weekend! Thanks to all the staff and volunteers who worked their butts off to make this a truly memorable weekend.

Today we went to the Dallas World Aquarium. That's really a misnomer. It should be called the Dallas World Rain Forest. It is an amazing exhibit of birds, mammals, reptiles, fish, and marsupials living in a naturalized habitat. We even saw hummingbirds flying through the trees!

Next weekend is the Zilker Garden Festival in Austin. Let's hope that Texas weather remains art-friendly!

Hummingbird fact for today: Hummingbirds can see ultraviolet light which enables them to identify different types of flowers and plants.
Posted by Ozarklake at 8:25 PM No comments:

Sneak Peek at My New Studio 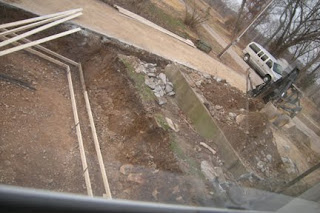 Finally! Construction has begun. Way back in mid-January, we notified our propane company that they needed to move their tank to the other side of the house. After two weeks of almost daily phone calls, the service manager finally came out to see what needed to be done. Then we got hit with the blizzard, and the ground was snow-covered for 2 weeks. As soon as the snow was gone, we again started calling them almost daily. EVERY time he had the same excuse: the last he heard the boom truck was down in Branson but he'd get to us as soon as he could. In the meantime, the weather was great and the contractor was ready to go to work. After two more weeks of hearing the same lame excuse, we called another propane company, had them place the tank where we wanted it, paid them to run new gas line, and then they picked up the tank that was holding up construction and moved it out of the way after they disconnected it. One week after telling the first company to just come pick up their tank, it's still sitting here, holding propane that we paid for and will now lose. But at least it's out of the way and the contractor has been hard at work.

Living in the construction chaos is nerve-racking to say the least. Thankfully we'll be heading off to Texas soon and by the time we get back, we should have an actual building! I had hoped to meet up with my sister in Austin but now that plan may change. We'll have to wait and see if it works out.

We shipped some feeders to Applehurst in Winterset, Iowa, this week. If you're in the area, stop in and say hi to Susan.

Hummingbird fact for today: The 17 species of hummingbirds that have bred in the United States and Canada represent approximately 5 percent of the world's hummingbird species.
Posted by Ozarklake at 9:33 PM No comments: