Hummingbird Banding on our Porch

She placed net "cages" over two of the feeders. Each "cage" has a big opening, and the bird flies in to get to the feeder. Their natural inclination is to fly up, so they go to the top of the "cage" and she reaches in and gently gets it. She then places it in a drawstring bag to move it from the feeder to her work table. Then she wraps the bird in a "footie" and weighs it. She sexes it by looking at a specific wing feather. Then she measures the wing and the bill. And she blows air through a straw to look for molting and body fat.

Feels good to know that we are contributing to hummingbird research and data.

Hummingbird fact for today: Hummingbird banding is like holding magic. Banders are amazingly gentle and careful with the tiny birds, although as intercontinental migrants, hummers are tougher than they look.
Posted by Ozarklake at 11:06 PM No comments:

The Fun Part of the Summer

This part of the summer is undoubtedly the most fun with all the hummingbird activity in full swing and orioles still hanging around. The juveniles of both species are now fledged and joining the parents at the feeders in anticipation of migrating southward.

We had a fantastic July. We headed first to Portland, OR, for the International Master Gardeners Conference. Met a lot of wonderful people and sold a lot of feeders :-) Had dinner one night with Terrie's Aunt Evelyn and Uncle Dick, and spent quality time with Bill's sister Lynn and brother-in-law Tom. The best part about Oregon, however, was stopping at roadside stands and getting fresh-picked cherries - cheap compared to prices here in MO.

We played tourist for the next week and a half. Couldn't pass by the Evergreen Air and Space Museum without going in to see the Spruce Goose. Drove part of the Pacific Coast Highway. Marveled at Yosemite and Kings Canyon and Avenue of the Giants. Found sea lions in San Diego Harbor. Visited our friends Lisa and Gam at Hidden Forest Art Gallery. Panned for gold in Julian. Got re-acquainted with an old Navy buddy of Bill's (and acquainted with his wife). Visited Terrie's mom and stepdad in Yucca Valley.

Then it was on to Sedona, AZ, for the annual Hummingbird Festival sponsored by the International Hummingbird Society.  Met up with old friends and made new friends, all while selling lots of feeders. And once again we laughed with delight as the local Anna's hummers passed over the imported plastic feeders to feed from an Ozarklake feeder. Enjoyed a mini-reunion with two of Terrie's high-school classmates, Vicki and Willa, and their husbands Ray and John respectively. 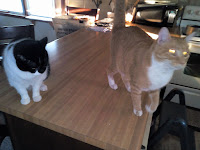 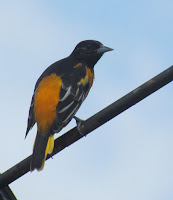 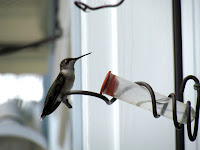 And then it was home to our bird friends. We have the best neighbors in Steve and Sandy Stock because they take care of the hummers, the orioles, and the kitties while we are out gallivanting. For now, we're just having fun with our hummers. It's almost a full-time job to keep the feeders filled! They're going through two gallons of nectar daily. Thankfully the orioles have cut back on their two pounds of jelly daily :-)

Hummingbird fact for today: Hummingbirds cannot walk or hop, though their feet can be used to scoot sideways while they are perched. These birds have evolved smaller feet to be lighter for more efficient flying. They will use their feet for itching and preening, however!
Posted by Ozarklake at 11:56 AM No comments: