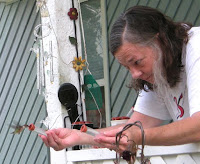 Posted by Ozarklake at 10:53 AM No comments:

Hummers feed by sight and will generally check out anything to see if it is a source of food. Many birds follow a regular route through their territory checking out the food sources. This behavior is called traplining. But judging from the activity on my porch all day every day, the only traplining these birds are doing is in my yard! This gaggle of eating machines has consumed 12 pounds of sugar in two weeks! This feeding is going on with rain coming down, so you have to listen carefully to hear them chittering at each other.

Hummingbird fact for today: Hummingbird nests are raided for eggs and chicks by snakes, large birds, and some mammals but adult hummingbirds are not regular prey. The most common danger is the family pet that gets lucky enough to ambush one.

Posted by Ozarklake at 8:03 PM No comments:

Artists are People Too

We were accepted in a big show in Indiana scheduled for August. We had heard varying reviews about this show and it required travel expenses. Then we learned of the Summer Art, Food, and Wine Festival at the Gala Event Center in Union, MO. We carefully weighed the pros and cons, comparing costs to traveling to the east side of Indiana or traveling a couple of hours from home. Both were unknowns, but we decided we'd cut down on expenses and promote a festival in Missouri. So we cancelled the Indiana show.

The deadline for entry for the Summer Art, Food, and Wine Festival was May 31. The stated artist notification date of June 30 for the Gala Event Center show came and went. We began to be concerned but thought perhaps the event coordinator was busy. A week went by. Two weeks went by. Emails went unanswered. Phone calls went unanswered. Finally, on July 13 someone called back to say the event had been cancelled and letters stating that went out "last week". We received the letter and our returned check on Friday, postmarked July 14. No explanation was given for the cancellation of the show.

If there was little interest in the show, the show's promoters would have known this when the entry deadline of May 31 came and went. The cancellation notice could have been sent then. Surely by the artist notification date of June 30 they knew they were cancelling the event, and artists could have been notified then. Instead, I learned of the show's cancellation a mere 3 weeks prior to the event dates. At this point, I cannot go begging to the Indiana show that I cancelled out on. Entry deadlines for any other shows I can locate are long passed. The Gala Event Center in Union, MO, and the Art, Food, and Wine Festival have left me without any avenue to generate sales.

Artists are people, too. We apply for shows and take our chances, but we also plan a schedule so that we can generate sales on a fairly regular basis. The abrupt cancellation of a show with notification of said cancellation a mere 3 weeks prior to the event is, in my opinion, extremely thoughtless and shows a distinct lack of consideration for the artists.

Hummingbird fact for today: As night approaches, a hummingbird will feed as heavily as the nectar supply allows, storing as much as a third of its weight in nectar in its balloonlike crop.
Posted by Ozarklake at 8:40 AM No comments:

How to Spend a Saturday Morning

Okay, we're just a little bit crazy, but Terrie says the view from her angle was absolutely amazing!

How to Attract Hummers

Posted by Ozarklake at 8:36 AM No comments: