We LOVE to hear from customers, especially when they and their hummers are enjoying our feeders. We got a really neat note from a customer yesterday. He bought this feeder in 2009 at the Omaha Summer Arts Festival. He was writing to request new tubes. But he also shared a story about this feeder. 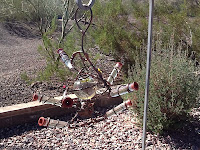 He wrote, "We bought a feeder from you two at a show in Omaha a few years ago and I got some replacement tubes from you I think maybe year before last. We have it down here in Arizona now. The hummers love it, though they don't share well. A little story on the feeder, its popular with the birds and also with guests who remark on its' individuality. A few years ago during our first winter down here we attracted a little female Anna's Hummingbird whom we called Anna (aren't we creative) No other bird has been attached to this feeder like her so I still call it Anna's feeder. She sat on top of a bush maybe 4 feet away from it for the entire winter...I mean everyday, most of the day!! She was so stingy with it, others learned to feed when she was driving some interloper away. Sometimes if the tubes needed refilling she would come to us as we came out of the house and hover about six inches from our faces. Kinda frightening at first but we got used to it and it seemed she wanted fresh food because if I refilled the tubes she would drink while I'll was doing it. We spent the summer in Nebraska that year, returned in the fall, hung the feeder and she was back within a few hours!"

He included a picture of the feeder and amazingly enough, we remember this feeder and we remember meeting them in Omaha. It is so satisfying to know that he has been using this feeder since he purchased it in 2009 and it is still feeding hummingbirds in 2013 and he is still enjoying owning it. That's a darn good return on investment! Thanks, Jeff, for allowing us to share your story.

Hummingbird fact for today: The female hummer will build her nest before she looks for a suitable male mate for breeding.

Posted by Ozarklake at 7:26 AM No comments: