This is So Much Fun!

May 2, 2015, Lake of the Ozarks, our front porch. Courting season. The nectar is fresh and not boiled, there are no red feeders, no red nectar, no natural or fake flowers, no red ribbons, no red fountain (it's copper), no red plastic imported feeders, and no drips from the bottle feeders. Soon the females will abandon the feeders (for the most part) to lay and hatch their little brood of 1 or 2. After hatch, she will feed them a diet of mostly digested bugs. When the fledglings leave the nest, they will be almost as big as mom and ALL of them will be at the feeders :-)
Posted by Ozarklake at 9:37 PM No comments:

The Gang's All Here

After seeing just a couple of males several days apart mid-April, it is now apparent that the charm of hummingbirds that left here last fall has returned. We've counted at least 4 males feeding at the same time, and countless females. Today I happened to catch one of the males wooing the ladies with his big sweeping U-shaped flights back and forth in front of her. The nesting material we put out is being pulled and plucked, so the mama's are getting their nests ready. The crowd on the front porch feeders is such that Terrie's already started hand-feeding every evening. 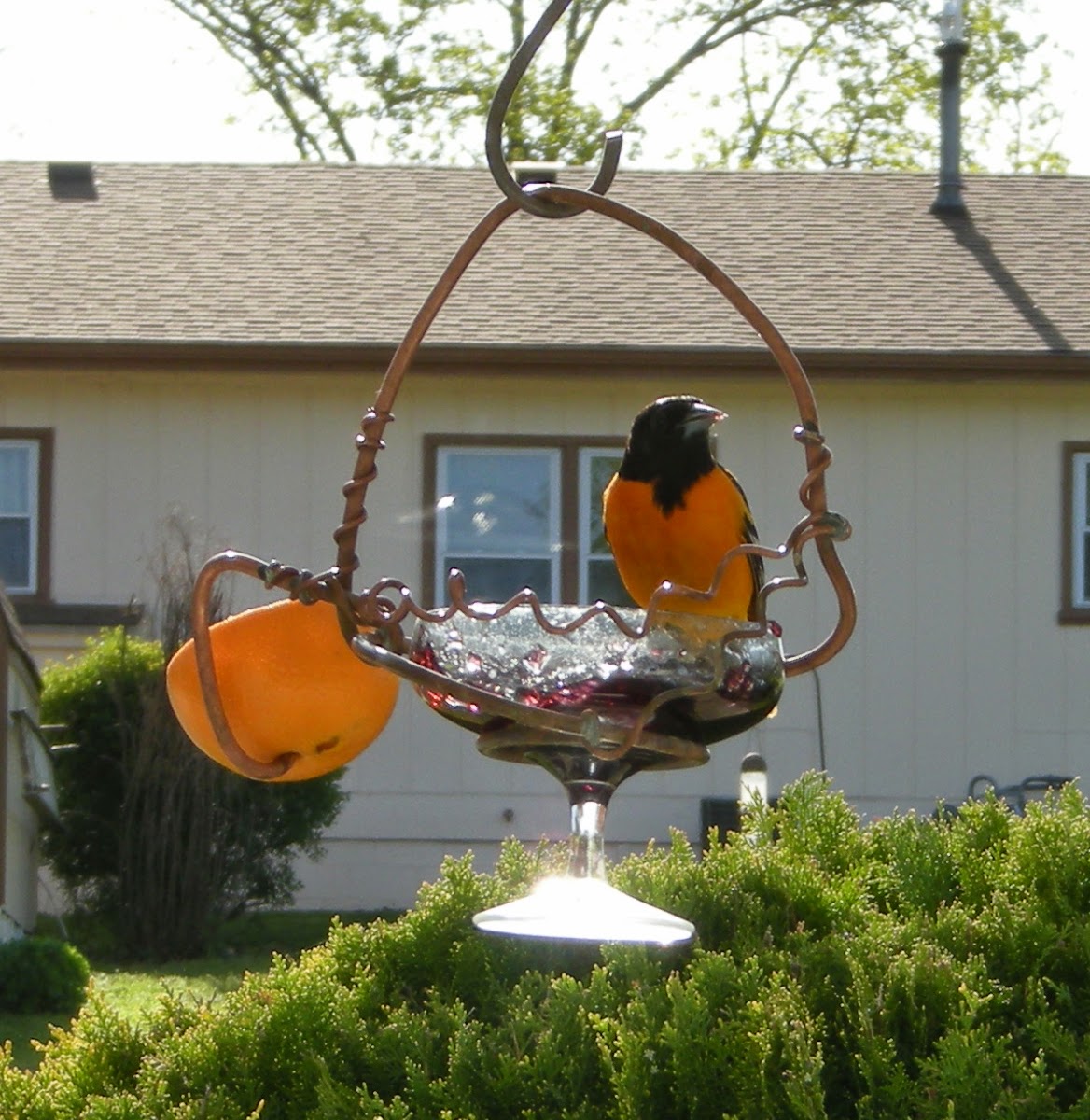 We also had quite a surprise when a male orchard oriole showed up on April 17. We had no oranges, but Terrie got the grape jelly out for him, which seemed to make him happy. So luckily the jelly was already out when a male Baltimore Oriole showed up 5 days later! Usually it's May 1 before we see any orioles. Terrie was beside herself! Still no signs of female orioles, but they will be here.

There's a new store opening in Delmar, NY, and Ozarklake feeders will be featured in it! Merriman and Pfister's Marketplace is so new that there website isn't finished. We're honored they chose our items for the new store. Ozarks Classic Crafts Mall in Hardy, AR, just got a new shipment of Ozarklake feeders, too.

The Illiana Pond and Garden Expo in Crown Point, IN, was a new venue for us. Thanks to all who visited our booth and made it a successful show for us! Next week we're off to The Biggest Week in American Birding on the shores of Lake Erie in Northwest, OH. It was a good show for us last year and we're hoping it's better this year.

Hummingbird tip for today: Female hummingbirds head for the breeding grounds about three weeks after the males when more flowers are blooming and producing nectar. In promiscuous species such as hummingbirds, which do not form pair bonds at all, breeding females are more valuable than males and a reliable food supply reduces their risk.
Posted by Ozarklake at 7:54 PM No comments: