Remember George Carlin's bit on "stuff"? I always think of that bit this time of year when my wife has new "stuff". She goes through her old stuff to make room for the new stuff. Usually it's a major upheaval in the house. This year has been no exception. However, this year her old stuff ended up in my new stuff. She's a margarita drinker. She even keeps a bucket-o-margarita in the freezer. So naturally this year she received some new margarita glasses (mainly because I have managed to drop and break all her old ones). In order to get the new glasses in the cabinet, she had to clean out some old stuff. Part of that cleaning out process included four champagne flutes that are so seldom used I didn't even know we had them. I've utilized flutes before in my feeders but this was the motherload - four identical matching flutes. First we made sure that we could fit each with a stopper and feeding tube. Then I disappeared into the studio for several hours while my creative side took over. Those four flutes are now one amazing (if I do say so myself) multi-station hummingbird feeder. Sometimes cleaning out stuff has its rewards. 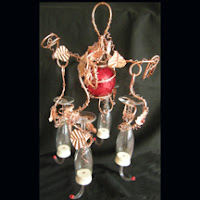 Hummingbird fact for today: Rufous hummingbirds migrate from Central America as far as Alaska – a 12,000 mile round trip, longer than any migrating goose.
Posted by Ozarklake at 7:54 AM